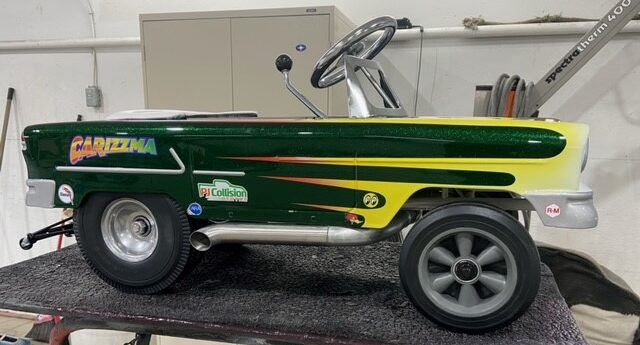 It is no secret that the automotive industry is struggling to attract talent, and extraordinary challenges require extraordinary creativity and leadership. These B.C. shops stepped in to provide both through a unique challenge.

Through its AutoCareersBC program, the Automotive Retailers Association (ARA) and BASF have teamed up for an innovative event, the Pedal Car Challenge. The goal of this province-wide event is to encourage youth to consider the automotive industry as a viable career choice.

The automotive industry offers many different career paths that students may be unaware of or have limited exposure to. The purpose of the Pedal Car Challenge is to introduce students to sustainable careers in the automotive trades and provide mentorship.

Each participating school in B.C. has been given an antique pedal car (a human-powered toy car), to design, modify, and paint. The students have also been provided with mentorship and guidance from the ARA’s industry partners (BASF, Color Compass Corporation, and Craftsman Collision). It is intended that this opportunity to design and manufacture a pedal car will help students learn the fundamentals of vehicle design and manufacturing while broadening their understanding of the industry.

" To kick off the event, three teams of collision repair and restoration professionals took up the challenge of restoring three different pedal cars to extraordinary effect.”

To kick-off the event and inspire the schools, three teams of collision repair and restoration professionals took up the challenge of restoring three different pedal cars to extraordinary effect. 360 Collision Centres, P.J. Collision, and and the cast of popular TV show Rust Valley Restorers all stepped in, each coming out with a Pedal Car Challenge story of their own. BASF provided the cars designed by 360 Collision Centres and P.J. Collision, including the paint, and Clint Wilson of Ideal Auto Wrecking donated the Rust Valley Restorers’ vehicle.

360 Collision Centres is owned by Rick and Daryl Francoeur. Located in Abbotsford, the shop is one of B.C.’s most recognized and highly manufacturer-certified shops. With over 55 years of combined experience between them, the brothers can create or customize anything with wheels, and more. The shop has been a member of the ARA for a long time, so when the ARA contacted Rick and asked if they would paint a pedal car, they agreed.

“I thought it would be a fun little project,” said Rick. “And there’s obviously a shortage of technicians, so we thought it would be fun to get involved with the cause. We have a lot of apprentices that work here.” Most of the metal work was done by Rick’s brother and partner, Daryl. Darren Emmerson did all of the paint work. “We gave the car lots of cool character,” said Rick. “We envisioned what a kid from the 40s would want to have, so we lifted up the front end and put a hood scoop on it. We put a box on the back because we thought kids would want to pack stuff, and we stretched everything out. We put in new upholstery and made the headlights work—all kinds of neat stuff. It took over a month to do the work.” Rick hopes that the car will help raise money for the foundation, but he also has the end-user or owner in mind: “I really hope that little kids actually get to use these cars, maybe some disadvantaged kids. I hope that whoever buys them donates them gives it to the Christmas bureau or something like that.”

"There's obviously a shortage of technicians, so we thought it would be fun to get involved with the cause.”

Located in Vanderhoof, B.C., PJ Collision is also an ARA member. Aside from collision repair, the company also does restoration work. So how did Dave get involved with the Pedal Car Challenge? “Our paint sales representative, Mike Bradley at Color Compass, asked us if we would be willing to do a custom paint job on a pedal car,” said Dave. “Mike explained what it was about, and that the ARA would be auctioning these custom cars off for charity. I was interested because I do custom work when I can. I used to do a lot of this work for the Harley Davidson dealership in Prince George.” Dave said it felt good to work on this project despite the challenges: “It took some time to complete while fitting it into a busy production schedule—our shop is amazingly busy. It wasn’t easy finding the time, especially with fire, floods, and pandemics going on.” “I had to do some fabrication,” said Dave. “I built wheelie bars, changed up the wheels, and made a different axle. I used a bathroom hand-rail cut in half to make the side pipes as well.”
Dave also built a shifter—and it looks like a shifter. “The shift arm I used came off of one of my old Impalas,” said Dave. “The base is a socket with an adapter in it, and the shifter fits perfectly into the adapter. Also, I ended up cutting out the pedals and building a floor. The car weighs about 30 pounds. You just see what works and what you can adapt to work.”

"I had to do some fabrication. You just see what works and what you can adapt to work.”

Finally, it was time to paint. “Painting the car wasn’t rough, but the car itself was rough the way it came, so I had to fill seams and use high build primer to smooth it out before spraying the candy-green flake base colour,” said Dave. “I then sanded it down again to mask-out and spray the scallops, and I painted the bumpers and grill silver. I finished off with ruby-red taillights and recleared three times to smooth out any masking lines, then added the old-school hot rod decals.”

Mike Hall’s fondness for vintage cars and his team’s passion for restoring them is the leitmotiv of the TV show Rust Valley Restorers. Mike’s shop, Rust Bros Restorations, is located in Tappen, B.C. The team became involved in the Pedal Car Challenge when the ARA approached Clint Wilson, owner of Ideal Auto Wrecking (Chilliwack), and asked if he could assist with the project.Not a lot of people are going to remember this, but they made a movie called Bugsy Malone in the late 70s,” Clint said. “It was this 30s gangster-type story starring all kids, and it was a musical with Scott Baio and Jody Foster. They all had pedal cars that looked like old mobster rods, and they would peddle around with their toy machine guns and shoot whipped cream at each other. Those pedal cars intrigued the heck out of me back then, so I wanted one. I have many now.”

Moved by the idea that the pedal cars would be auctioned off to support the ARA’s foundation and scholarship fund, Clint approached his friends at Rust Valley Restorers.

“The ARA has done a lot for me over the years,” said Clint. “I want to give back however I can. I already knew the Rust Valley guys because they had restored my 66 Pontiac on the TV show. When I told them about the project, they said, ‘It’s a good cause. We’re in!’ So then I donated one of my cars and delivered it in the trunk of my Pontiac, and they restored it and did the unveil on TV (Rust Valley Restorers, Season 4, Episode 6). Mike handed the project over to the team’s apprentice, Cassidy Mceown. Clint was awestruck by the results. “The unveiling was really neat,” said Clint. “When I brought it, it looked like a rough piece of junk. It was an old English pedal car that had seen better days. It was dented from one end to the other, the old wheels were rusted, and there were rubber strips that served as tires. One of them was coming off, and another was missing half. They ended up putting new wheels on it.”

"When I brought it, it looked like a rough piece of junk. It was an old English pedal car that had seen better days.”

“Everything has been replaced,” said Clint. “They built a little tail gate that opens and closes. They made a steering wheel, put in a lift kit, lights (with a battery), front and back bumpers, and a custom grill. They also gave it a snappy paint job with racing stripes.

Clint noticed another important element during the unveiling. There was a yellow handprint on the back quarter panel. During this time, the horrific legacy of the residential school system had come to light, and the Rust Valley crew wanted to draw attention to the issue. They invited a First Nation’s woman, Tonita, and her daughter, Leah, to participate. In the episode, Tonita says, “This is for Every Child Matters. It is to raise awareness for all the residential school survivors.”

Upon completion, the ARA brought two of the pedal cars, the ones completed by 360 Collision Centres and PJ Collision, to Victoria to showcase at a recent meeting with the B.C. government. The ARA board used the cars and the Pedal Car Challenge as an opportunity to discuss industry challenges with respect to attracting young people, women, and Indigenous people into the automotive trades. The pedal cars proved to be wonderful ambassadors, much enjoyed by attending MLAs and ministers.

*The Pedal Car Challenge is sponsored by BASF. Industry support and mentoring is being provided by Color Compass Corporation and Craftsman Collision.

**Editor’s note: The completed pedal cars were displayed and auctioned off at an extra special event, the ARA’s 70th Anniversary Celebration & AGM which was held in Whistler from September 30 to October 2, 2022. The auction helps raise funds for the Automotive Retailers Foundation Inc. (ARFI), a program that offers scholarships and bursaries to individuals pursuing a career in the automotive industry. 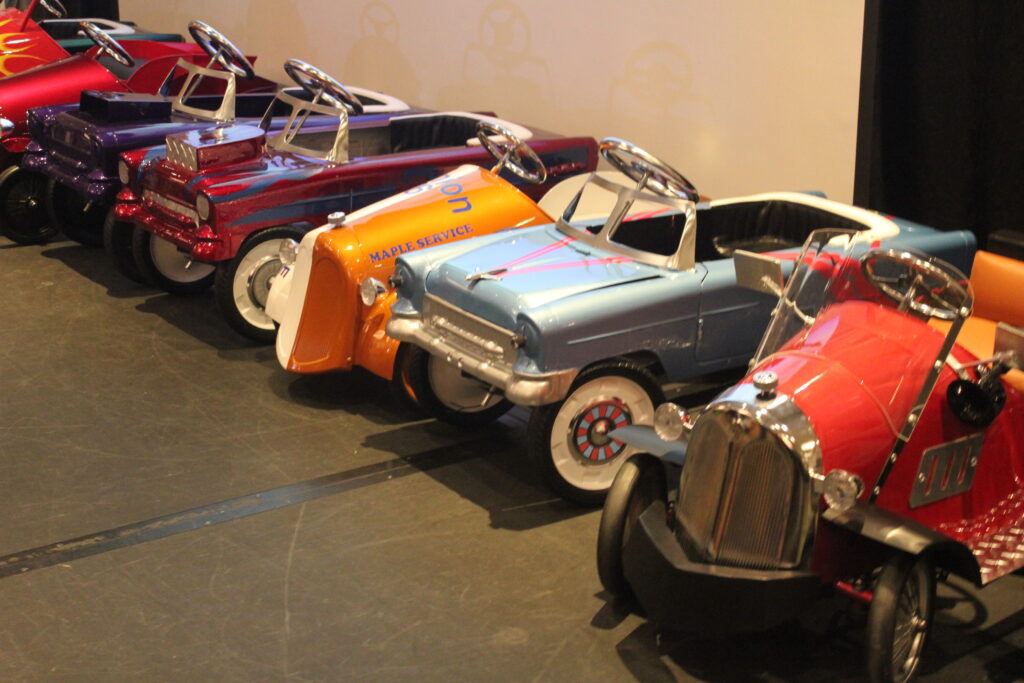 Seven cars, six schools, three sponsors, and one association collaborate on a project with an urgent mission—to engage youth in the automotive trades. Read more >>